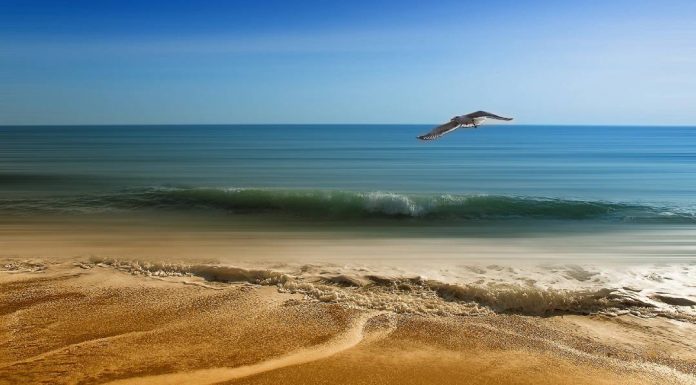 The Meaning of Freedom

Simply put, freedom is a person’s ability to do something or abstain from it based upon his/her own free will. It is a special quality enjoyed by every rational human being.

With it, a person acts without the interference of others, because that person is not owned by anyone, not on the individual level or on the level of the state, society, etc.

The word freedom stands for something greater than the right to behave as one chooses. It also stands for an equal opportunity for life, equality and the pursuit of happiness for all human beings.

1. “The law will never make a man free; it is men who have got to make the law free.” Henry David Thoreau

2. “Everyone has oceans to fly, if they have the heart to do it. Is it reckless? Maybe. But what do dreams know of boundaries?” Amelia Earhart

3. “One of the purposes of life is to let go of all that baggage you’re dragging around and be free again.” Neil Strauss

5. “To be free is to have achieved your life.” Tennessee Williams

6. “For a man to act himself, he must be perfectly free; otherwise he is in danger of losing all sense of responsibility or of self- respect.” Henry David Thoreau

7. “Our duty is to encourage every one in his struggle to live up to his own highest idea, and strive at the same time to make the ideal as near as possible to the Truth.” Swami Vivekananda

8. “True freedom means that we are alone. We alone decide what we believe, how we act, and who we become. We are responsible for our lives – nobody else. True freedom is both liberating and terrifying.” Eric Peng

9. “I don’t mind what happens. That is the essence of inner freedom. It is a timeless spiritual truth: release attachment to outcomes, deep inside yourself, you’ll feel good no matter what.” Jiddu Krishnamurti

10. “Those who expect to reap the blessings of freedom, must, like men, undergo the fatigue of supporting it.” Thomas Paine

11. “I believe in a vision of equality and justice and freedom and multi-racial democracy, built on the premise that all people are created equal, and they’re endowed by our creator with certain inalienable rights.” Barack Obama 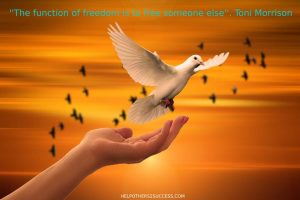 12. “The function of freedom is to free someone else.” Toni Morrison

14. “Let us not seek to satisfy our thirst for freedom by drinking from the cup of bitterness and hatred.” Martin Luther King Jr

15. “Freedom is not a gift bestowed upon us by other men, but a right that belongs to us by the laws of God and nature.” Benjamin Franklin

16. “Let every nation know, whether it wishes us well or ill, that we shall pay any price, bear any burden, meet any hardship, support any friend, oppose any foe to assure the survival and the success of liberty.” John F. Kennedy

17. “Science can flourish only in an atmosphere of free speech.” Albert Einstein

18. “Freedom is never more than one generation away from extinction. We didn’t pass it to our children in the bloodstream. It must be fought for, protected, and handed on for them to do the same.” Ronald Reagan

19. “Letting go gives us freedom, and freedom is the only condition for happiness. If, in our heart, we still cling to anything – anger, anxiety, or possessions – we cannot be free.” Thich Nhat Hanh

20. “When a man is denied the right to live the life he believes in, he has no choice but to become an outlaw.” Nelson Mandela

21. “It’s beautiful to be alone. To be alone does not mean to be lonely. It means the mind is not influenced and contaminated by society.” Jiddu Krishnamurti

22. “The English did not come to America from a mere love of adventure, nor to truck with or convert the savages, nor to hold offices under the crown, as the French to a great extent did, but to live in earnest and with freedom.” Henry David Thoreau

23. “No man is good enough to govern another man without his consent.” Abraham Lincoln

24. “The only way to deal with an unfree world is to become so absolutely free that your very existence is an act of rebellion.” Albert Camus

25. “The desire of gold is not for gold. It is for the means of freedom and benefit.” Ralph Waldo Emerson

26. “Everything can be taken from a man but… the last of the human freedoms – to choose one’s attitude in any given set of circumstances, to choose one’s own way.” Victor Frankl

27. “The freedom from something is not true freedom. The freedom to do anything you want to do is also not the freedom I am talking about. My vision of freedom is to be yourself.” Rajneesh

28. “We have no right to believe that freedom can be won without struggle.” Che Guevara

29. “I don’t care whether you’re a top Wall Street banker, if somebody has to tell you when to be at work, what to wear, and how to behave, you’re not a free person.” Naval Ravikant

30. “In the truest sense, freedom cannot be bestowed; it must be achieved.” Franklin D. Roosevelt

31. “For to be free is not merely to cast off one’s chains, but to live in a way that respects and enhances the freedom of others.” Nelson Mandela

32. “Life without liberty is like a body without spirit.” Kahlil Gibran

33. “Better to die fighting for freedom than be a prisoner all the days of your life.” Bob Marley

34. “True freedom is always spiritual. It has something to do with your innermost being, which cannot be chained, handcuffed, or put into a jail.” Rajneesh